Everything existing in the universe is the fruit of chance and necessity. – Democritus

Microsoft research made available video presentation of a book by Peter Hoffman ‘Life’s Ratchet: How Molecular Machines Extract Order from Chaos‘ about latest achievements of what we (scientists) presently know about inner workings of life at a nanoscale level. Peter mentions such philosophical concepts as life force, creationism, and some other before discarding them as unnecessary. The presentation is astounding and some of the footage he shares is unbelievable. For example, he shows video of a tiny body inside a cell walking with a molecular payload in some direction to accomplish some function. You can find these animations on the Kanazawa Biophysics Lab website. But here are couple images showing an arch-like structure in the middle making a full step with something attached to it at the top right side:

And here’s a step: 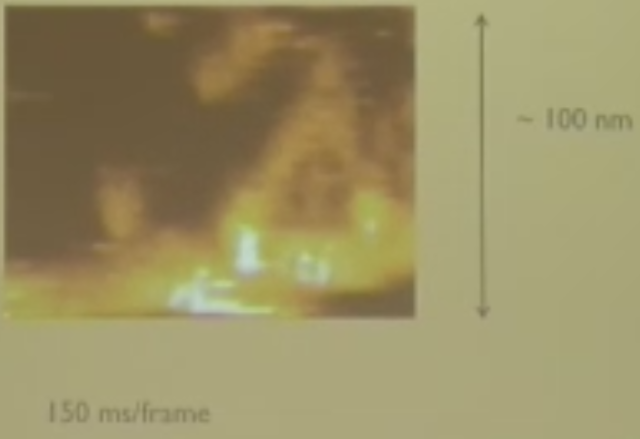 The idea that Peter presents has immense implications to artificial intelligence and machine learning. In essence, he suggests that intelligence and ability to think can be achieved through introduction of randomization and reset function and that nature and evolution has been successfully using both techniques throughout the existence of the universe. Example of a reset that he gave is: if you want to move a heavy bolder up a slope of a hill, make quantum energy push it up while you prop the bolder behind to prevent it from sliding back down. Watch the video to better understand the idea and buy the book.

Here’s the transcript from the presentation.

Below the calm, ordered exterior of a living organism lies microscopic chaos. Our cells are filled with molecular machines, which, like tiny ratchets, transform random motion into ordered activity, and create the “purpose” that is the hallmark of life. Tiny electrical motors turn electrical voltage into motion, nanoscale factories custom-build other molecular machines, and mechanical machines twist, untwist, separate and package strands of DNA. The cell is like a city—an unfathomably, complex collection of molecular workers creating something greater than themselves.

Peter starts with several quotes of which most of us probably share the following by Immanuel Kant:

That crude matter should have originally formed itself according to mechanical laws, that life should have sprung from the nature of what is lifeless, that matter should have been able to dispose itself into the form of a self-maintaining purposiveness – that [is] contradictory to reason.

And rightfully finishes with quoting Democritus:

Everything existing in the universe is the fruit of chance and necessity.