On Moore’s Law, Metamaterials, and Supercomputers

The quotes below are from Scientific American article that discusses new possibilities presented by supercomputers for designing new materials, feat not possible until recently.

In 1878 Thomas Edison set out to reinvent electric lighting. To develop small bulbs suitable for indoor use, he had to find a long-lasting, low-heat, low-power lighting element. Guided largely by intuition, he set about testing thousands of carbonaceous materials—boxwood, coconut shell, hairs cut from his laboratory assistant’s beard. After 14 months, he patented a bulb using a filament made of carbonized cotton thread. The press heralded it as the “Great Inventor’s Triumph in Electric Illumination.” Yet there were better filament materials. At the turn of the century, another American inventor perfected the tungsten filament, which we still use in incandescent lightbulbs today. Edison’s cotton thread became history. 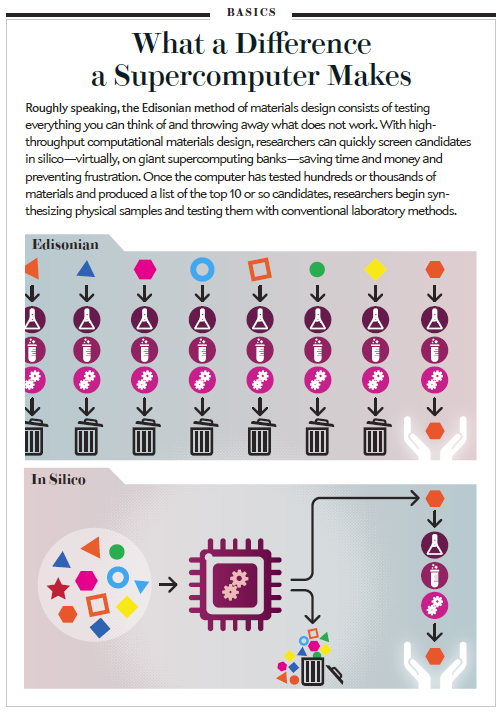 Since 2011 we have been leading a collaboration of researchers that aims to accelerate the computer-driven materials revolution. We call it the Materials Project. The goal is to build free, open-access databases containing the fundamental thermodynamic and electronic properties of all known inorganic compounds. To date, we have calculated the basic properties (the arrangement of the crystal structure, whether it is a conductor or an insulator, how it conducts light, and so on) of nearly all of the approximately 35,000 inorganic materials known to exist in nature. We have also calculated the properties of another few thousand that exist only in theory. So far some 5,000 scientists have registered for access to the database containing this information, and they have been using it to design new materials for solar cells, batteries, and other technologies.

Computing is a field in need of transformative materials. Recently we have seen many serious predictions that we are nearing the end of Moore’s law, which says that computing power doubles roughly every two years. We have long known that silicon is not the best semiconductor. It just happens to be abundant and well understood. What could work better? The key is to find materials that can quickly switch from conducting to insulating states. A team at U.C.L.A. has made extremely fast transistors from graphene. Meanwhile a group at Stanford has reported that it can flip the electrical on/off switch in magnetite in one trillionth of a second—thousands of times faster than transistors now in use. High-throughput materials design will enable us to sort through these possibilities.

Novel substances that can deflect light could lead to superfast Internet and razor-thin smartphones. Metamaterials are made up of tiny arrays of microscopic elements such as metal rings or rods that can bend, scatter or transmit electromagnetic radiation in ways that no natural material can. The elements must be smaller than the wavelength of the radiation they are intended to manipulate. Picture a net so small it can deflect a wave of light the way the tall netting behind home plate on a baseball field deflects foul balls. Now imagine that by tweaking the size and composition of the gaps in the net, you can not only deflect light or allow it to pass through but also alter its trajectory, change its color or even make it disappear. Metamaterials manipulating light in these ways could form the basis for more reliable wireless Internet connectivity, denser data storage and all-around more capable electronics, not to mention a smartphone as thin as a credit card.