Thermal Touch can turn any surface into a tablet

A new innovation from a German company called Metaio takes a simple insight and applies it to great effect: with a simple thermal camera, they use the heat signatures left by our fingertips to turn virtually any surface into a touch interface. It’s called Thermal Touch. 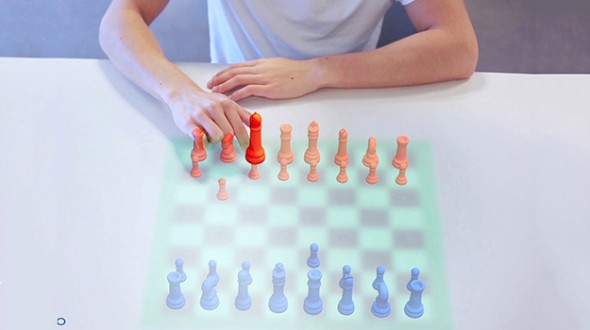 Is the key to consciousness in the claustrum?

Hypothesis that consciousness is located in the region of the brain called claustrum, named such after an enclosed space in medieval European monasteries.

The location of the claustrum (blue) and the cingulate cortex (green), another brain region likely to act as a global integrator. The person whose brain is shown is looking to the right (see the inset in the top right corner). Brain Explorer, Allen Institute for Brain Science 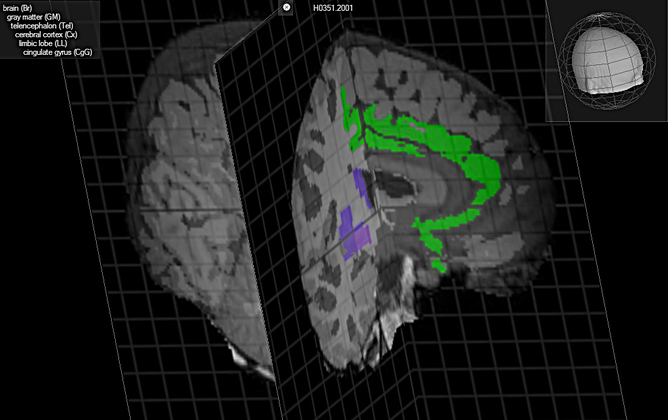 Perhaps the most important reason eye tracking will play an ever more crucial role in human computer interactions is that our eye activity is driven by subconscious processes in our brain. By providing insights into cognitive brain activity, monitoring eye movements has signifier potential to help programs interact with people in a more natural way.

So I want to talk today about a lot of the physiological basis of what’s happening inside our head, how our brains work such that we can make these decisions. What’s going on behind our eyes? Un-cloud some of this issue of what’s going on inside our head. So the whole story basically starts with light. The universe started with light. Universe is Internet, light going all over. It’s going between the planets, it’s going between the galaxies, it’s going between people, it’s actually happening down at a microscopic level. Everything starts with light. So then human life comes along, and we humans or any life form has to figure out what’s in its environment. Well, it picks up photons. So you have to have some mechanism to pick up the photons, that’s the way you figure out what’s going on in the world. And so we build these things, and in the human they became our eyes. And it’s a pretty fantastic device. It’s an amazingly fantastic device. The engineering that went into designing our eyes is just outstanding.

Skype Translator, demonstrated at the Code Conference Tuesday, is the result of years of work by Microsoft researchers and engineers that delivers “near real-time audio translation” between different languages, writes Gurdeep Pall, corporate vice president of Skype and Lync at Microsoft.

“It is early days for this technology, but the Star Trek™ vision for a Universal Translator isn’t a galaxy away, and its potential is every bit as exciting as those Star Trek examples,” Pall writes in a post. “Skype Translator opens up so many possibilities to make meaningful connections in ways you never could before – in education, diplomacy, multilingual families and in business.”

Peter Lee, Microsoft Research corporate vice president, shares insights and a sneak peek into the Skype Translator, derived from decades of research in speech-recognition, automatic-translation, and machine-learning technologies. Skype Translator is being developed jointly by the Skype and Microsoft Research teams, and combines voice and IM technologies with Microsoft Translator along with neural-network-based speech recognition to deliver near-real-time cross-lingual communication. With the Skype Translator, we’re one step closer to universal communications across language barriers, enabling people to connect in ways never before possible. In Lee’s words, “It’s truly magical.” 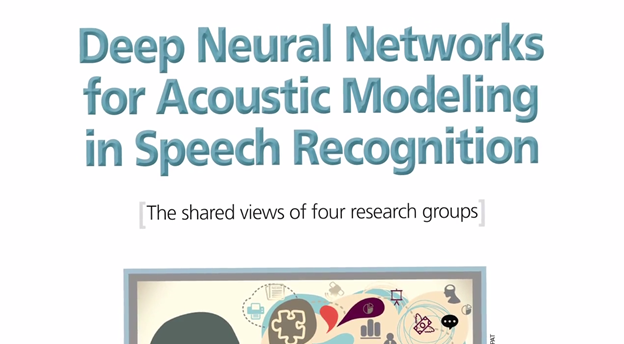 As seen in Monocle magazine: The S 500 Intelligent Drive Concept embodies the technology that is driving the next generation of motoring. 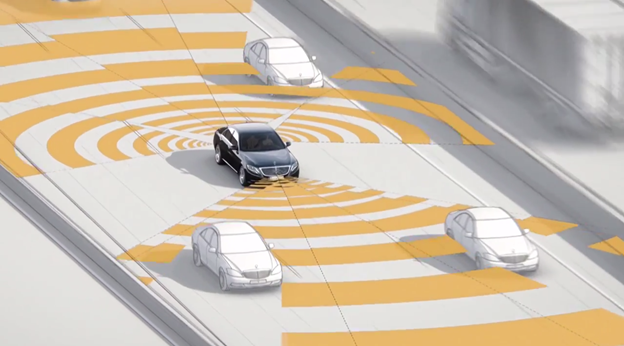 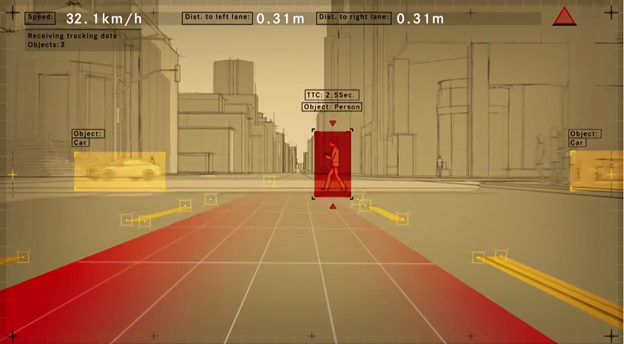 A new U.S. military program focused on brain implants could help diagnose and treat soldiers suffering from psychiatric disorders known as “shell shock” in World War I, “battle fatigue” in World War II and post-traumatic stress disorder (PTSD) since the Vietnam War. Such brain implants might even someday help restore the lost memories of wounded soldiers returning from the battlefield.

The electronic implant program relies on neural plasticity, which allows the brain’s anatomy and physiology to change over time.

The SUBNETS program seeks to reduce the severity of neuropsychological illness in service members and veterans by combining recording and analysis of brain activity with near-real-time neural stimulation, using Deep Brain Stimulation (DBS) technology, to coax the brain to “unlearn” the detrimental signaling patterns that underlie these diseases. 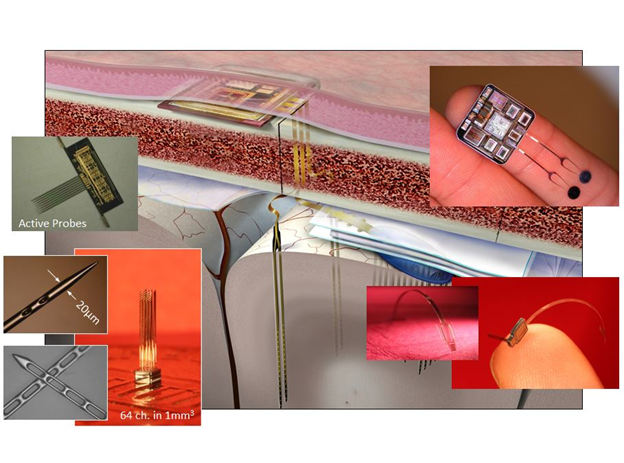 In this artist’s concept, a miniature electronic device placed between a patient’s skull and scalp would serve as an interface between a series of electrodes — placed at varying depths in different regions of the brain — and a clinician, who could wirelessly review neurological data recorded by the electrodes and communicate with the device to prescribe tailored therapies. Photos on either side show a sampling of existing devices that could serve as inspiration or building blocks for SUBNETS technologies. DARPA will evaluate multiple designs from both performer teams over the course of the program. (Credit: Massachusetts General Hospital and Draper Labs)

If you have been injured in the line of duty and you can’t remember your family, we want to be able to restore those kinds of functions. We think that we can develop neuroprosthetic devices that can directly interface with the hippocampus, and can restore the first type of memories we are looking at, the declarative memories. 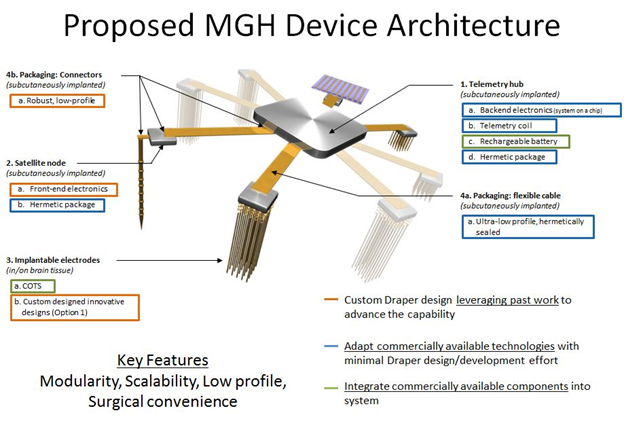 (Artist Concept) The research team led by Massachusetts General Hospital will use a combination of commercial-off-the-shelf electrodes and custom technology developed by Draper Labs to create novel systems. The proposed design will focus on an ultra-low-profile, hermetically sealed interface device capable of being recharged through inductive coupling. (Image courtesy of Massachusetts General Hospital and Draper Labs)