A View From The Other Side

A number of people who’ve seen NASA’s annual lunar phase and libration videos have asked what the other side of the Moon looks like, the side that can’t be seen from the Earth. This video answers that question. The imagery was created using Lunar Reconnaissance Orbiter data.

Image Composite Editor (ICE) is an advanced panoramic image stitcher. Given a set of overlapping photographs of a scene shot from a single camera location, the app creates a seamless high-resolution panorama. ICE can also create a panorama from a panning video, including stop-motion action overlaid on the background. Finished panoramas can be shared and viewed in 3D on the Photosynth web site, or saved in a variety of image formats.

The flamboyant cuttlefish performs a hypnotic dance across the ocean floor. But don’t be fooled by its beauty—this flashy cephalopod could be deadly. Filmmaker and biologist Shane Siers captured the cryptic creature in Puerto Galera, Philippines. “Usually no more than three inches [in length], their small stature is offset by big and bizarre behavior and literally flashy coloration,” he says. “They usually move around by ‘walking’ along the [seafloor], moving the bottom of the mantle back and forth in a comical, elephant-like shuffle while undulating their fins and waving their brightly colored tentacles.”

Why Are These Dolphins Beaching Themselves?

Do These Fish Really Shoot Their Prey with Spit?

Archerfish are the only fish in the world that shoot its prey with streams of water. 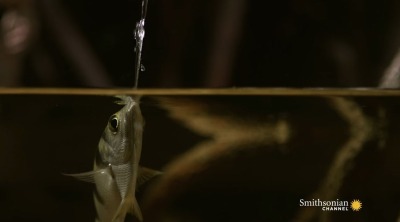 A bushbaby can jump more than 20 feet from one tree to another. Which is why this rat doesn’t stand a chance against this primate.

Velvet worms are 400-million-year-old caterpillars that have an unusually gooey way of subduing their prey.

Stay Away from Packs of Hungry Lionfish

With giant pectoral fins and colorful stripes, the lionfish is an imposing underwater predator. What’s even more intimidating is how it hunts.